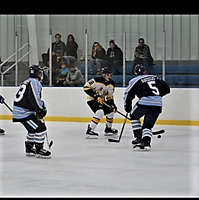 The Nighthawks are proud to announce that Jack Belmas has made his commitment to Loyola Maryland.

Belmas had a nice season as an 18 year old in Junior Hockey. Belmas ended the season with 3 goals and 11 assists and played several roles for the Nighthawks.

Coach Tryder says, “Belly has a high ceiling when it comes to hockey and improved consistently during the season. He was a pleasure to coach and I have no doubt that great things are in his future. “As a coach, I would love to have him back. As a mentor, I am very excited to see him, get started, at Loyola.”

Jack had some comments about his time spent with the Nighthawks and his future at Loyola: “My experience with the Connecticut Nighthawks organization was instrumental in my development as not just a hockey player, but as a man. The unlimited ice time helped my teammates and me hone our skills, on ice skills and become extremely close. Being with one another, day in and day out, all day, playing for a great organization was truly an incredible experience.”

“The coaching staff became mentors to you off the ice as well as great leaders over the boards and on the ice. If I had not played for the Nighthawks, I would not be playing hockey at Loyola, which I have chosen because of their great Mechanical Engineering, program. I also would not have met some incredible, life long, friends.”

The Nighthawks and Coach Tryder would like to wish Belly well, in his future endeavors.